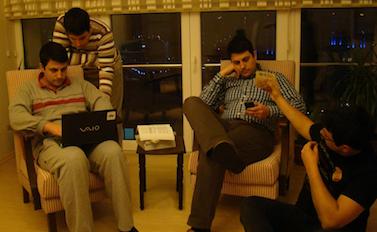 Lemi Orhan Ergin is the co-founder and Chief Software Crafter at craftgate.

Lemi Orhan Ergin is a software crafter based on Turkey with a passion for raising the bar of his profession and sharing his experiences with communities. He is the co-founder of Craftgate (One-Stop-Shop Payment Gateway) and founder of Turkish Software Craftsmanship Community. He previously worked at Sony and eBay at various technical leadership and management roles. He has been actively programming since 2001. He is an active practitioner and mentor in programming, leading teams about engineering practices and hands-on programming.

He took Bs. and Ms. degrees from Marmara University Computer Engineering Department in 2002 and 2005 respectively. He has been actively developing software since 2001. He has worked as software architect, software craftsman, technical leader, team leader, technical coordinator, Scrum Master and Agile coach in dozens of software projects at BYM, GittiGidiyor / eBay and Sony. When he was a managing partner in ACM, he had provided consulting services to dozens of companies. He had led the establishment of agile software cultures, continuity and sustainability in software teams. At iyzico, he was leading cultural transformation of iyzico engineering on top of Agile & Lean mindset and Software Craftsmanship movement. He co-founded Craftgate with Hakan Erdoğan, Sabri Onur Tüzün and Murathan Özcan. One-Stop Shop Payment Gateway: Craftgate got funded 2 million dollars on May 2022.

In order to focus to their product, i.e. Craftgate, he does not deliver trainings and consultancy.

He is addicted to learn new technologies, develop new ideas, construct well-defined structures and teach them to others. He has already attended tens of seminars and conferences as speaker. He is sharing the slides of his talks via SpeakerDeck. His presentations have been already viewed a few million times in internet overall.

He is a big fan of human-centric development disciplines, like agility. He has a lot of deep experience in several methodologies (like Scrum, eXtreme Programming and Kanban), cultural transformation, software craftsmanship, building agile ALM processes, software engineering practices and building a sustainable agile development culture in organizations. He has CSM, PSM1, PSD1, Scrum Master and Kanban Practitioner certificates. He has worked in Scrum teams as Scrum Master, Scrum Team Member and Agile Coach since 2008. He loves to share his knowledge with others. He prepared knowledge sharing sessions and enjoy coaching teams in both technical and non-technical aspects.

Application life-cycle management is also his expertise. From build management to release management, from requirement analysis to monitoring, he has worked in all areas of software development. He gives special importance to test driven development, continuous integration, clean code principles and software craftsmanship. He has been doing code reviews in daily basis and coaching juniors since 2005.

He was an active member of Agile Turkey community for 5 years and organization & community lead between 2015 and 2017. Between that period, he involved intensely in the organization of Agile Turkey Summit 2015 and 2016 and CraftSummit 2015 as the product owner role. He is also the founder of Software Craftsmanship Turkey community, i.e. the only Turkish community about Software Craftsmanship. He already organized 200+ free meetups as private and public. He also has been facilitating code retreats since 2013 including the Global Day of Coderetreat.

Even though he shares his knowledge in English in many areas, he believes in the power of learning in native language. Therefore, he is sharing his experience about agile development in Turkish via agilistanbul.com with Turkish audience. He was in the team for translating Agile Manifesto into Turkish. He is the official Turkish translator for Software Craftsmanship Manifesto, SOA Manifesto and Disciplined Agile Manifesto.

All he wants is to work with you to build a better development culture with both process and technical sides and to see happy faces at the end.

I've been leading and coaching agile teams for years. My main aim is to build robust, stable, flexible, extensible, high quality software with teams having highly-competent, motivated people in a fast and efficient way. For detailed information, please visit my LinkedIn profile.

80+ videos of some of my talks are published at Youtube already. You can also access them as below.

I upload the slides of my talks to Speakerdeck. Total number of views of my presentations exceeded a few million over Speakerdeck, SlideShare and BusinessInsider. That's huge! If interested, please check SpeakerDeck for details.

My passion is sharing. I started to share my experiences and knowledvia via podcasts. I created my own podcast "Lemi'nin Not Defteri / Lemi's Notebook" and published. If interested, please check Soundcloud or directly start adding RSS feed to your podcast client.

I am a Turkish guy, originally from my lovely city Izmir, Turkey. I am currently earning my life in Istanbul where living is like fighting with the traffic and chaos everyday.

I have a lovely wife, who is an assistant professor at Marmara University Computer Engineering Department and 2 little boys.

Ask me questions, I love sharing my knowledge and experience. You may understand how eager I am for collaboration from the event list that I attended as a speaker. If you want to access me, please send me e-mail, or send a message via LinkedIn or Twitter. I will reply you as soon as possible. [email protected]

I love to speak at conferences. I started to visit Europe and Middle East for being in collaboration with regional communities and being involved in conferences.

Giving back to the community is the way he lives. He has already spoken at 50+ conferences (at 4 keynotes) and 200+ seminars, organized 200+ meetups to feed his passion. Some of the international conferences he spoked as follows:

He had interesting days with the Apple root bug at 2017 and collected unforgettable stories.